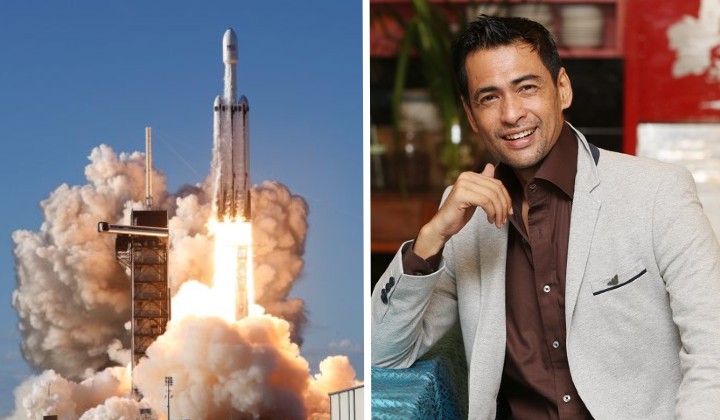 In most peopleâ€™s minds, Malaysiaâ€™s association with space is defined by Datuk Dr Sheikh Muszaphar Shukor and it stops right there.

Did you know that Astronautical Association of Malaysia exists?

Also known as Astro X, itâ€™s a merry band of former candidates of Malaysiaâ€™s first Angkasawan programme whoâ€™ve dedicated their time and energy to promote the knowledge of science to schoolchildren across the country. And yes, Dr Sheikh Muszaphar is also a part of this crew as a patron.

One of their biggest events of this year is the inaugural Venus Run 2019, nothing to do with the Roman goddess or the tennis player, but the often forgotten second planet from the Sun.

â€˜ Education Matters, Run for Scienceâ€™ Venus Run held to promote science and rocketry to schoolchildren by engaging the community and runners to take part in a 5km Fun Run event Come and join me Everyone for a good cause . Type PromoCode drsheikh to get a RM15 off . Looking forward to it Salam Everyone … Love As Always …

But what does the planet Venus have to do with an Earthly Run?

For one thing, Venus is ridiculously hot and Captain Faiz Kamaludin, President of Astro X, wants to draw attention to very real possibility of a burning hot Earth due to ongoing climate crisis.

â€œThe run will begin at 8am, once the sun has risen, so that people can get an idea what itâ€™s like to run on Venus, and to feel the effect of climate change.â€

Itâ€™s also because Captain Faiz and Dr Sheikh Muszaphar think that we need to turn the spotlight to other planets in the solar system.

â€œEveryone is talking about Mars right now. Thereâ€™s so many other planets to learn about. In fact, I learned so much from Captain Faiz about Venus!â€

Itâ€™s fun facts like this and more that Astro X wants the world to know, especially schoolkids. Hence the Venus Run.

Themed around â€˜Education Matters, Run for Scienceâ€™, the Venus Run is a 5km Fun Run open for everyone from kids to adults that will be held at Putrajaya Wetlands Park on the 7th of July (Sunday).

Weâ€™re pretty sure you can tell itâ€™s no ordinary run because this one includes ROCKETS.

The race literally blasts off with a rocket launch by an actual astronaut, Malaysiaâ€™s very own Dr Sheikh Muszaphar.

But it doesnâ€™t stop there, guys, thereâ€™s an actual Science
Fair taking place with rocketry workshops!

Yep, you read that right.

You get to MAKE AND LAUNCH YOUR VERY OWN ROCKETS.

â€œWe will be having at least four types of rockets at the event, and weâ€™ll be teaching kids how to make solid fuel rockets.â€

Solid fuel rockets are the type of rocket engines used in used in missiles and well, space rockets. Itâ€™s made by mixing fuel and oxidizer together into a solid propellant which is then packed into a solid cylinder.

Donâ€™t worry about safety though, as the rocketry workshops are conducted by trained professionals.

Kids who participate in the rocket-making session will also get a certificate signed by both Dr Sheikh Muszaphar and Captain Faiz.

Sorry adults, the rocket-making is not for you, but you can watch multiple rockets shooting into the sunny Malaysian sky. Or join the Fun Run and win yourself a nice, shiny medal.

Entry fee is only RM60 and most of it goes into raising money for Astro X to continue spreading knowledge and the curiosity for science in schoolchildren.

â€œSpace is the future and kids are the future. Thatâ€™s why you see so many countries clambering to explore new frontiers in space. We want Malaysians to be there as well.
And itâ€™s not just about space, we want kids to be inspired to venture into STEM fields. To be doctors, scientists and engineers.â€

In case you didnâ€™t know, Astro X actually goes around Malaysia conducting workshops and space talks at schools for curious young students. Theyâ€™ve also developed a free app called â€˜GoCikguâ€™ filled with teaching modules on space and rockets for teachers to use in classrooms.

The Venus Run 2019 welcomes all curious minds and walk-ins are welcome. Besides the run and rockets, there will also be numerous science experiments with smoke cannons, hot air balloons and gyroscopes.

Find out more at angkasawan.org.my.