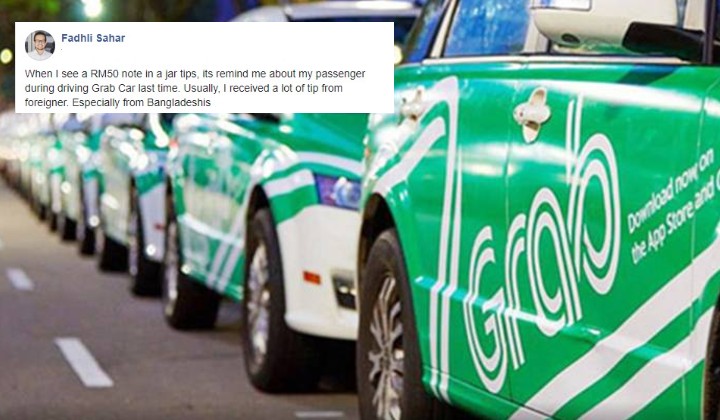 All people are the sameâ€¦ This was the message conveyed by one big-hearted Grab Car driver whose simple act of kindness, and a strong tolerance to unique odors earned him a new perspective in life.

Taking to Facebook to share his tale, Fadhli Sahar tells the story of the time when he received an unexpected fortune from an unforeseen source.

3 years ago, while going about his normal routine as a driver, Fadhli received a pickup request from three Bangladeshi security guards who were looking for a ride home from work.

Though fully aware of the unflattering stereotypes associated with foreign workers (Usually insensitive comments on their body odor…), Fadhli continued on with the call and proceeded to drive the three men to their destination.

Though their journey was less than fragrant, Fadhli continued on while doing his best not to insult his passengers.

Realizing that their driver was hiding his discomfort, one of the three passengers attempted to clear the air with a little conversation.

The man explained that the trio had previously tried and failed to hail three other cars before Fadhli came to pick them up.

(We hailed three other Grab cars before you. All of them canceled when the saw us)

The man then continued explaining that getting rejected by local
e-hailing drivers were something that they have become accustomed to.

(This doesn’t only happen today, but every day)


Wrote Fadhli, quoting one of of his passengers via his Facebook posting

Upon arriving at their stop, the man then proceeds to give Fadhli a hefty tip for his effort.

Fadhli’s small yet thoughtful deed didn’t go unnoticed. Malaysians from all walks of life are filling in the comment section commending him on his considerate nature.

Others also came in to share their experiences while working as a e-hailing drivers.

Through his small gesture of empathy, Fadhli gained a new appreciation to those who are less fortunate than him.

“Even they are immigrant but they are still human. They have feeling, emotion and thought. Something that we must respect on all people.
Until now, I don’t understand why some of driver are choosy about their passenger base on appearance. If it is your job, just get it done.”

Fadhli’s story does put a smile on our faces, and surely gets him a five-star rating in our book!