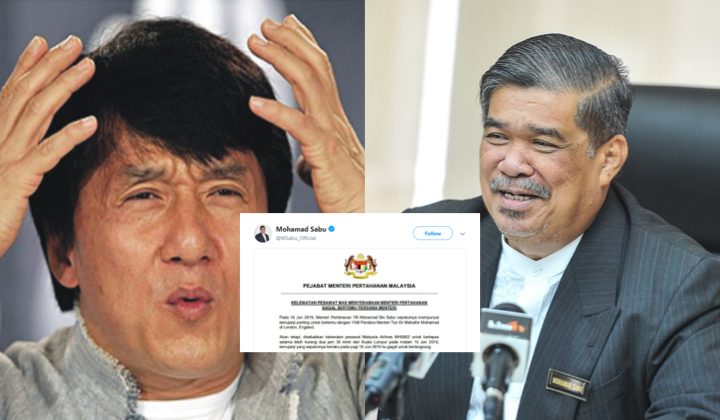 Usually, when ministries in Malaysia release statements, they help clear up the air over a complicated issue. Itâ€™s rare that an official statement ends up confusing people instead.

But thatâ€™s what Malaysian netizens are at the moment: confused. All cause of the Ministry of Defenseâ€™s official statement posted to Twitter early yesterday morning (24 June)

According to a report by Free Malaysia Today, Mat Sabu had an important meeting with Prime Minister Dr Mahathir Mohamad in London last week (yes, this happened a while ago). However, due to a flight delay on Malaysia Airlines, Mat Sabu missed his meeting!

Which, we can agree, is truly horrible. We donâ€™t like being late (even with Malaysian timing), it makes us look bad. And we figure other people also don’t like being late, especially if it was for a meeting with their Prime Minister, of all people.

However, Malaysian netizens donâ€™t understand why Mat Sabu is announcing the incident.

What is the need to issue this statement?

This is a matter between the minister’s office #Mindef and #MAS.

An official complaint is appropriate enough.

Even Najib was confused…

Those who were not confused, tried to explain the situation to Mat Sabuâ€¦

1. Aircraft fly when safe to do so;
2. There are wifi on KUL – LHR flight where you can inform PM on the delay via email;
3. First time this kind of press release issued to everyone in the world 😂 to know.

Dear Mat Sabu…. Malaysia Airlines does not exist & operate at your beck & call. It is bound, above all, by safety of passengers.

There were also those who empathized with Mat Sabu, flight delays are no fun.

Itâ€™s wrong of MAS to only apologise to the minister. But the minister has done right to wake MAS up. He wasnâ€™t asking for preferential treatment but a call to raise the standards. Civilians complain all the time too. Iâ€™m with Mat Sabu in this.

After the statement was posted Malaysia Airlines actually responded with an apology to the Defense Minister for the inconvenience caused, citing safety concerns as the reason for the delay.

“The airline was aware of the Minister’s meeting and spared no expense to ensure that the aircraft was safe to fly as safety is of the utmost importance at all times for the airline.”

MAS via The Star Online

After the apology was made, Mat Sabu then told press that he already made up with Malaysia Airlines.

Apparently Mat Sabu has spoken to the chief executive officer of Malaysia Airlines, Izham Ismail regarding the incident and theyâ€™ve settled the issue.

He told reporters today at the ministryâ€™s Aidilfitri event that heâ€™s a huge fan of Malaysia Airlines. Mat Sabu also revealed that prior to becoming a minister, he would fly with the airline often and was a platinum card holder.

BTW, speaking of Malaysia Airlines, did you guys know that Dr Mahathir is looking to sell our national airline company?