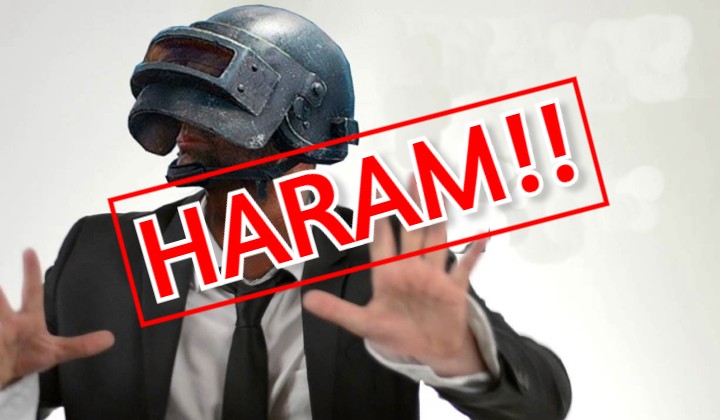 The Indonesian Ulema Council (MUI) in Aceh has issued a
fatwa against the online shooting game PlayerUnknown’s
Battleground (PUBG).

That’s right, the hugely popular online game was slapped with the Haram label on Wednesday. (looks like no more chicken dinner guys…)

The council took an exhausting TWO WHOLE DAYS of research and deliberation to conclude that the game is detrimental towards the religion and its followers.

In Islam, the term haram refers to anything that is prohibited in the Quran and Sunnah – spoken or written acts of the Prophet – committing a forbidden act would result in sin.

According to the group, PUBG and other similar games are identified as haram because, not only does it insult Islam, but also triggers violent behavior in the individuals who play it.

Alarmed by the soaring popularity of mobile gaming among Aceh’s Muslim majority, MUI stated that the ruling would apply to other games too. (no word yet to what titles they might ban next though… fingers crossed its not Pokemon…)

“We’ve seen that children and even adults in Aceh are starting to get addicted to the game and they’re playing it everywhere on their mobile phones… It’s getting worrying.”

PlayerUnknown’s Battlegrounds Mobile or more affectionately known by its over 50 million player from accross the globe as simply, PUBG, is an online multiplayer game published by Tencent Games playable on mobile devices as well as consoles and PCs.

The game applies a battle royale format where players are pitted against each other in a free for all shoot-to-kill, scavenger hunt to the end, leaving only one winner emerging victorious.

PUBG and other online multiplayer shooting games have been in the global headlines recently as governments around the world have been taking moves to ban the playing of such games in their countries.

In May, the Iraqi parliament had banned several popular online games, including PUBG.

In India, the popular game title had also been restricted, with police officials even actively seeking and detaining those who are caught playing the game.

The government of Nepal had also made moves to ban the game too.

However, its worth mentioning that fatwas are not legally binding in Indonesia and Malaysia (too just fyi…) but they can be used as a basis for the passing of new laws and Sharia.

Let’s hope the Malaysian government doesn’t catch wind of this (ridiculous) idea. (cuz some of us are trying to take the season...)

Borneo vs Kalimantan. What’s In A Name?