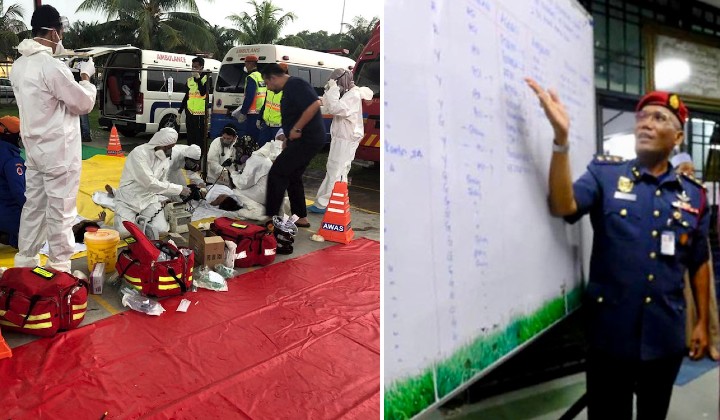 If it was oil spills into rivers that got people sick in March 2019, this time it is some fume gas that has not been identified causing children to be rushed to the hospitalâ€™s emergency department.

What started as an unpleasant odour smelling like burning grass and faeces led to more than a dozen ill.

As of now, only 2 schools, Sekolah Agama Taman Mawar and Sekolah Kebangsaan Pasir Gudang 4, are known to be affected with 15 people -13 students and 2 staff- rushed to Sultan Ismail Hospital (HSI).

Students affected are aged between 7 and 12.

The incident started yesterday evening at around 4pm during the Raya Open House celebration in schools.

Students started vomiting and had breathing difficulties, with one pupil fainting in school.

They were brought to HSI where 4 students were sent to Red Zone (critical), 3 students to Yellow Zone (semi-critical) and the others including the staff to Green Zone (not critical).

Until now, no one has been admitted.

There is speculation that liquefied petroleum gas (LPG) fumes were responsible for the poisoning.

Though Health Minister Datuk Seri Dr Dzulkefly Ahmad still has not officially announced the cause of the intoxication, everything is said to be â€˜under controlâ€™.

Precautions have been taken by the Johor Department of Environment (DoE) and the Fire and Rescue Departmentâ€™s Hazardous Materials Team (Hazmat), who have been monitoring the air quality within a 2 kilometre radius of the incident every 4 hours since last night.

So far according to the initial air quality report, no traces of carbon monoxide (CO), hydrogen sulphide (H2S) and volatile organic compound (VOC) in the vicinity.

No schools have been closed. Dzulkefly still feels it is too early for such measures to be taken.

If you are around Pasir Gudang, do take safety precautions such as minimise outdoor activities and wear masks.

Do seek medical help as soon as possible, if you have any similar symptoms, such as headaches, dizziness, vomiting or breathing difficulties.

And if you do know any information regarding any suspicious behaviour or activities, to contact the nearest police station.