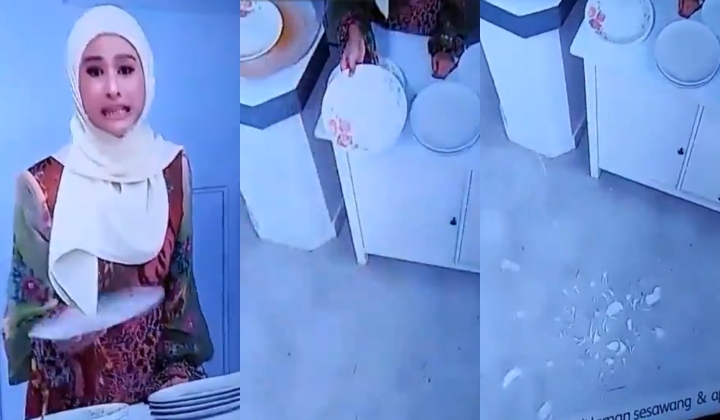 Letâ€™s be real. Since the popularity of online streaming services, we don’t really watch TV anymore. But, if you guys do turn it on, you’ll find that TV has somehow been taken over by shopping programmes.

We can all agree that there’s nothing more annoying than watching endless shopping programmes. So, when a flub happens during a live show, we’d obviously be really into that.

In the programme, the host is marketing a set of plates. Her selling point is how these plates are so hardy, they wonâ€™t break if you drop them.

She then proceeds to throw the plate, and as it hits the floor.. it COMPLETELY. SHATTERS. ON. LIVE. TELEVISION.

We can’t decide which is funnier: the fact that her co-host shut her eyes right before it happened, that the plate shattered into teeny-tiny pieces.

Or her cover baik statement after it happened.

Naturally, Twitterjaya had a field day. The tweet already has more than 26,000 retweets.

“She seems like she already knew what was about to happen”

“That was a smart cover up line”

“These corelle plates, if you don’t want them to shatter when they fall you have to drop them at a flat angle. If the corner impacts the floor first then it’ll definitely shatter”

“So, if you’re going to drop the plate, you should correct the angle first and then let go”

“This is true, you gotta set it to the correct angle first. This is the time to use the math knowledge we learnt in school”

“Ohh, I understand. Before we accidentally drop the plate, we have to make sure the plate will fall flat first la. Ok, noted”

“Please someone edit this with “Directed by Robert B Weide”

“You’re supposed to let the shatter play first, bro. And then immediately follow it with the credit scene”

“That’s too common bro, I wanted to do something different”

“No no. It’s supposed to have the incident, and then the credit scene”

“HAHAHA OKAY JUST DO WHATEVER”

“Researchers say the plate is no longer sold at Go Shop”

“Serves them right for taking every channel on the TV”

Malaysian Proves That Racism In Housing Rentals Is Very Much Alive