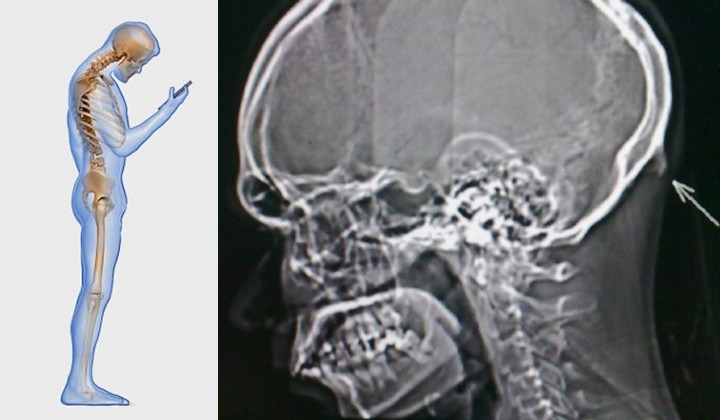 Do you spend most of your time looking down at your phones, tablets or gadgets?

Well, you might have something called an â€˜external occipital protuberanceâ€™ which is a spike-like feature just above your neck at the back of the skull, that you can feel with your fingers.

And if youâ€™re bald and skinny, it may even be visible from behind.

Rest assured, women, you too could be affected by this phenomenon.

Itâ€™s just that there is a higher prevalence of men having it with 67% occurrence compared to women of only 20%.

Regardless of gender, it’s still an issue – especially considering that Malaysians spend the most amount of time looking at their gadgets compared to other countries.

A health scientist from down under, David Shahar recently discovered a spike explosion as he went through over 200 slides of skull X Rays in Australia.

They are relatively common in older people. As enthesophytes gradually grow over time to compensate the tensile or compressive mechanical stresses suffered by the head.

The same research was previously conducted in the 19th century by a French scientist, Paul Broca looking for the same bony projections. Though he gave up on his research when he failed to find any.

Unlike Broca, Shahar found 41% of his 218 participants having the lump and about 10% having spikes of at least 20mm long in his study that was published in the Journal of Anatomy.

Looking at the X rays above, it is obvious that enthesophytes in the 28-year-old is MUCH LONGER than a person 30 years older.

This is because a hunched posture accelerates this growth.

Looking down at our gadgets creates extra pressure on the place where the neck muscles attach to the skull – and the body responds by laying down fresh layers of bone.

Although having enthesophytes may not always be painful, in some cases, it is so severe that it causes headaches and immobility.

So what are you doing to protect yourself from this problem?

Sabah Blood Banks Are Drying Up, Here’s How You Can Help