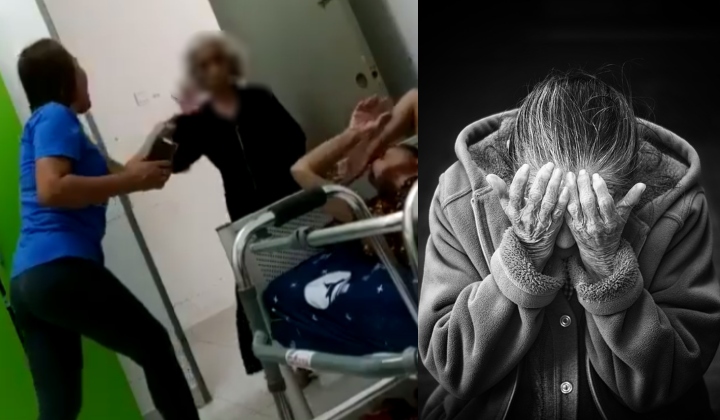 Elder abuse is a growing problem in Malaysiaâ€™s fast-ageing society but it is a crime that is grossly under-reported.

Recently, video of a woman abusing an elderly woman went viral on Facebook. In the video, a woman, believed to be a caretaker at the home is seen repeatedly taunting the elderly woman. The elderly woman tries to fight back but the caretaker continues to torment her.

According to the post, the caretakers of the nursing home have been abusing their residents for some time.

They have hit, starved and forced the elderly under their care to drink urine. The post goes on to say that since 2017, there have been 16 deaths at the nursing home.

Based on a report by the Malay Mail, the nursing home allegedly also locked the residents in their rooms for hours at a time, forced them to eat chillies and take excessive amounts of sleeping pills.

Since the video went viral, former employees of the home have come forward to back up the claims of elder abuse. Currently, the Negri Sembilan Social Welfare Department (JKM)  are reportedly investigating the incident.

The State Women, Family and Welfare Affairs Committee chairman Nicole Tan Lee Koon said that the authorities have also visited the home yesterday evening and revealed that the owner of the old folks home has lodged a police report with one of the caretakers for further action to be taken.

â€œAppropriate enforcement action will be taken if the centre does not comply with the provisions of the Care Centres Act 1993,â€

An ongoing study conducted by researchers at University Malaya revealed alarming findings about elder abuse and neglect in Malaysia: one in 10 Malaysians over the age of 60 in urban areas experience abuse.

Meanwhile, in February, Deputy Prime Minister Datuk Seri Dr Wan Azizah Wan Ismail announced the governmentâ€™s commitment to legislating an act to protect the rights and welfare of the elderly.

Though, she didnâ€™t indicate when the law would come into effect or elaborate on what the law will encompass.

While this research and the proposed law by Dr Wan Azizah are commendable efforts, they center mainly around elder abuse carried out within families rather than by care centers such as the one in the video.

Which then begs the next question. How do we actually help our elderly?

Good news is, although itâ€™s tough, there are a couple of things we can do as individuals to help the plight of our elderly community.

1. Be able to spot when abuse is happening.

2. Increase your awareness about elderly care and support.

One of the contributing factors to elder abuse cases, says consultant geriatrician Dr Rajbans Singh, is a lack of awareness, knowledge and understanding about elderly care and support.

UiTMâ€™s Dr Jaspal Kaur had observed that many age-related discriminatory practices and policies in the country exist because we see them as â€œmentally and physically weak, stubborn, out-of-date, unable to learn, seriously unhealthy and all in all a burden to societyâ€.

If you do encounter elder abuse cases, alert the Welfare Department or call the Kasih Helpline at 15999.

Considering the head of our government is an elderly person himself, we sincerely hope that the way the elderly are treated in Malaysia will be improved soon. Whatever it is, in a few decades, these laws will affect us too. Come on, we arenâ€™t getting any younger now are we.