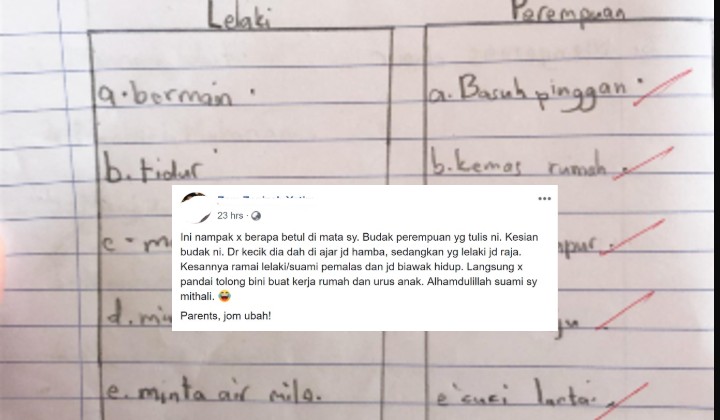 However, this one interesting piece by a little girl caught the attention of a teacher for its gender stereotyping.

Facebook user Zam Zanizah Yatim took to the social media platform to share a student’s archaic answers for a school exercise that asks students to list down the roles of a daughter and son in a family.

Under the Boy/Son column, the responsibilities were listed as:
a. playing
b. sleeping
c. eating
d. drinking
e. asking for milo (okay, this one is hilariously true though)

Meanwhile, the listed responsibilities of a Girl/Daughter were sadly written as:
a. wash dishes
b. tidy up the house
c. clean the kitchen
d. hang the laundry
e. clean the floors

Zam, whoâ€™s also a teacher, revealed that the answers were WRITTEN BY A GIRL and was quick to take the opportunity to call for a change.

This doesnâ€™t look right in my eyes. A girl wrote this. Pity her. From young, sheâ€™s been taught to be a slave while a man is treated like a king. The result is lazy men/husbands who are burdens. Can’t help the wife at home or care for the kids at all.Â  Praise to Allah, I have a good husband.

Many agreed with her thoughts with her Facebook post amassing over 6,000 shares (at the time of writing).

This issue comes hot at the heels of gender equality issues such as the recent proposal by the Malaysian Human Resources Ministry to include mandatory paternal leave in the Employment Act amendment.

The Malaysian Statistics Department has also reported an increase in female labour force participation. Currently, female participation is at 55.7% and the numbers are expected to grow.

With this, traditional gender roles will have to change as noted by the hundreds of comments on the Facebook post above.

Let us know what needs to be done. We’ve clearly still got a long way to go.