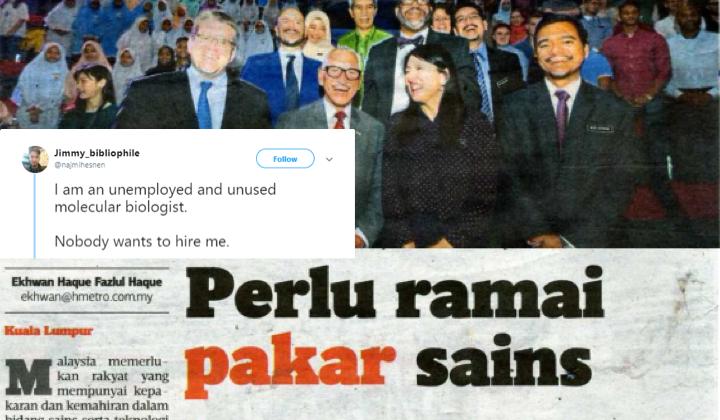 The government keeps saying that there is a lack of science graduates in Malaysia.

Then, more recently, Harian Metro released a report which stated that the country needs more science graduates. The report was highlighted on Twitter by a molecular biology graduate who is currently working in a non-scientific industry.

I am an unemployed and unused molecular biologist.

Nobody wants to hire me. https://t.co/UFNhsecDdl

Garnering over 13,000 retweets, @najmihesnenâ€™s tweet is a sad reminder of the reality for science graduates in Malaysia – we arenâ€™t able to get good paying jobs and we are left taking whatever positions are available in any industry to be able to financially support ourselves.

@najmihesnen clearly isn’t the only one in this predicament. There are many qualified scientists in Malaysia but not enough positions for us.

We have thousands of graduated students in Science & Tech related major and almost all of them is unemployed/working in a totally different field sb industry wont hire them. And they have the gut to say we needs more Pakar Sains & Tech when yg skrg pun masih terkapai2 cri keja.

Exactly! I am a biologist no one wanna hire me!

Same here. I am an unemployed and unused marine biologist.

Damn hard to find that kind of job in malaysia

These headlines are very frustrating for local science grads who are unable to get a good job in the industry.

I have a cousin who have nuclear science degree from UKM. Hard to find job suitable to her qualification locally. Gave up and become housewife.

I just gonna put it here. I have gone to interviews but to no avail. At the end I just have to take the job available which is not my field because I need to sustain myself.

I am currently a Lantikan Simpanan for C41 and expiring next January.

After the overwhelming response he got, @najmijesnen decided to post a poll to find out whether or not the majority of science grads are actually having a tough time looking for work within the industry. At the time of writing, majority of those who took part in the poll (40% of 1,080 participants) voted that they are currently employed outside of the scientific industry.

Are you a graduate of scientific studies? Where are you working now? Let us know in the comments!

Cc to Ministers: if you are wondering where all the brains which haven’t left country, we are here in call centers and retail centers. Drop by nearest 7E and you might find a marine biologist.

Are Trade Schools Better For You Than University? For Some People Maybe