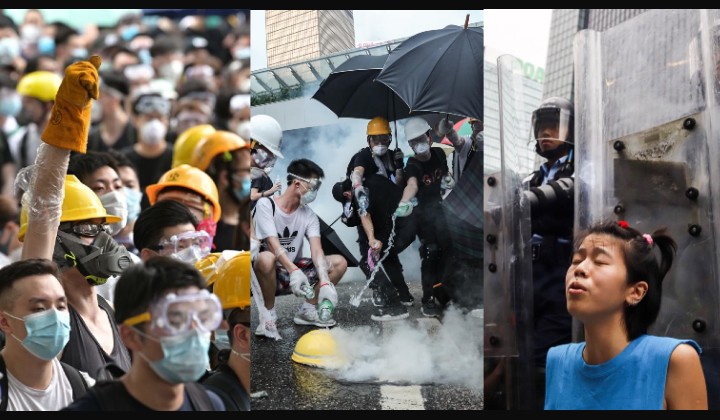 Hong Kongers took to the streets yesterday to protest a controversial bill that would allow extradition to mainland China.

The former British colony currently operates with an independent legal system, free press and unrestricted internet. If this bill is passed, it would give China the right to arrest alleged criminals in Hong Kong.

Essentially, this would give China the power to â€œlegally
abductâ€ critics of the regime.

The debate over the extradition bill was scheduled to take place yesterday, but thousands of activists formed a blockade around the government headquarters to prevent lawmakers from participating.

Just like when Malaysians were met with hostility during some of the Bersih protests, the Hong Kong protesters were met with police decked in riot gear.

However, the key difference is how well prepared the Hong Kong protesters were. Hereâ€™s what they did:

1. Armed with protective gear of their own

Long queues were spotted at the MTR ticket machines as protesters purchased their tickets with cash instead of using the contactless Octopus card.

Verna Yu confirms that people at train/metro stations in Hong Kong are buying paper tickets because they fear police will track them through their Octopus Card and know they were at the protest. Huge queues for tickets. pic.twitter.com/SRZOH4tRaP

There is usually never a line at the train ticketing machines. Judging from an overheard convo, it appears that people are reluctant to use their rechargeable Octopus cards for fear of leaving a paper trail of them having been present at the protest. pic.twitter.com/s1rsgSnCqL

Just as the tweet below shows, the protesters took metal barriers meant to contain them and positioned them to from blockades around the Legislative Building (where the debate was supposed to take place) instead.

Metal fences, initially set up by Hong Kong police for crowd control, have been torn down by protesters and used to build barricades to block the roads around the Legislative Council building: https://t.co/nu6iHffaW1 pic.twitter.com/BrGwOvUiWF

The roads leading to the Legislative building were also blocked by cars and busses.

So simple.. yet so brilliant.

6. Bringing extras to help each other out

In the video below, protesters quickly gave this reporter an umbrella and helmet when the police started firing tear gas in their direction.

Hong Kong’s youth protestors are kind. I post this clip to say thanks. @CBSrandy was rolling when the police fired tear gas at the group we were in. An umbrella and helmet were forced on me. I’ll prob never know who they are but I’m so grateful for their care. #HongKongProtests pic.twitter.com/NNAsFjpXOP

Organisers also had stockpiles ready to be handed out.

7. They cleaned up after themselves

Despite the exhaustion and brutality of the protests, they still stopped to clean up the city, throw away rubbish and even sorted out the recyclables!

2am in the morning, young Hong Kong protesters volunteering to pick up the trash after all the chaos.

While the protesters were well prepared to face opposition, it did not stop violence from breaking out. Police fired rubber bullets and assaulted the unarmed protesters.

Hong Kong is my home
And to watch how our government is treating the people
I’m heartbroken
Please share this so the world can see
We need your help#HongKongProtest #ExtraditionBill pic.twitter.com/hFCQJ7ECJh

Hong Kong is currently in shock after the long day and night of protest. CNN reports that at least two people are currently hospitalised with serious injuries.

Weâ€™re incredibly moved by the powerful images and videos weâ€™ve
seen of the protest and our thoughts and prayers go to the resilient people of
Hong Kong.

J&T Express Protests: What’s Going On & How To Claim Your Money Back