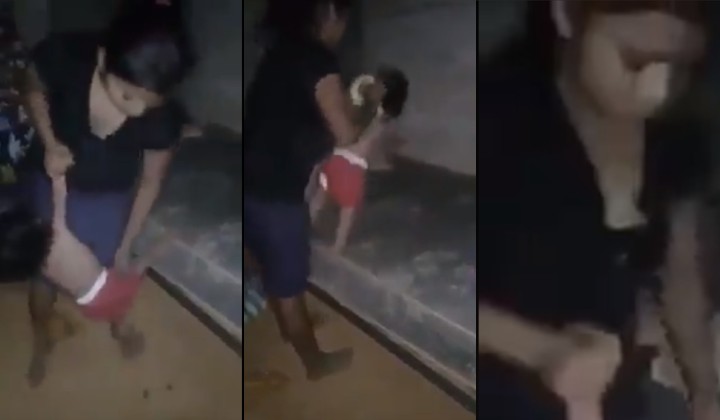 Police are urging the public to aid in the search of a woman currently wanted for sadistically abusing a baby in a recent viral video.

The extremely disturbing footage believed to have been taken in Malaysia, reveals the horrendous scene that transpired in a dark, grimy room.

The woman is seen viciously slapping, beating and quite literally clobbering a baby girl as she was changing it’s diaper and clothes.

The woman even savagely strangled the baby by the neck with it’s clothing and mercilessly swung her around as the toddler, believed to be around a year-old, howled away, visibly in distressed by the savage ordeal.

The 1.36-second clip, believed to have been recorded using a mobile phone by a bystander was circulating through WhatsApp and had since gone viral after catching the attention of enraged netizens disturbed by the shocking episode.

What youâ€™re about to see is extremely graphic and disturbing.

Bukit Aman is urging anyone who has information on this lady seen abusing a toddler to come forward and assist the police. You can WhatsApp the Criminal Investigation Department at 019-3019930 or just head to the nearest police station to lodge a report. pic.twitter.com/eDRUzTMug8

PDRM said that thus far, no report had been made on the incident and is calling for anyone with information regarding the case to step forward and assist their investigations.

We implore everyone to be on the lookout for this merciless individual. If you have any details on the incident, please contact the authorities at the nearest police station or via the following channels: