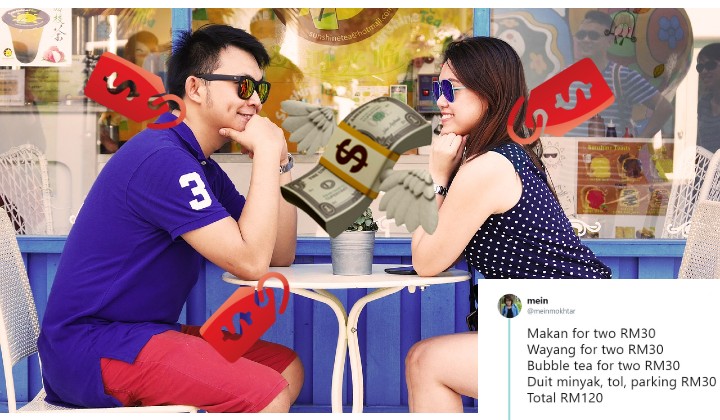 As young but eternally exhausted working adults, itâ€™s really
hard to have a social life let alone a dating life.

In the tweet which garnered 12,000 retweets, he broke down the price of going on a date in Malaysia and estimated total cost to be RM 120.

You see, a regular date costs about RM 120. Itâ€™s true what people say. If youâ€™re poor, donâ€™t ask a girl out lah. Otherwise, youâ€™ll be ridiculed for being ungentlemanly for not paying

His tweet sparked a discussion on the platform as netizens weigh in with advice and examples of their own.

Perks of dating me:

Remove the bubble tea and bring along mineral water, makes u look healthier and also pergi wayang waktu promotion. Or do it equally, if the girl needs to be treated like a queen, she needs to treat u like a king. Divide the bills.

Paling jimat bila keluar for me.

Some even pointed out that RM 30 for two meals is not enough in this day and age:

Translation: That RM30 meal for two is her eating and you watching right?

Translation: What do you mean RM 30? Two meals at Madam Kwan is already RM150

This discussion alludes to the rising cost of living in Malaysia along with a decline in the starting salaries for graduates with a basic and Masterâ€™s degree in 2018 as revealed in the Bank Negara Malaysia (BNM) 2018 Annual Report.

Another 2018 report by BNM also estimates the living wage range for Kuala Lumpur is between RM2,700 and RM6,500 per month. That’s WAYYYY higher that the RM1,100 minimum wage.

So far, there doesn’t seem to be any serious measures to address this issue. Although, Finance Minister Lim Guan Eng was reported saying that government will investigate why the current low inflation does not translate to lower cost of living.

Right now we can only hope for the best and try to get a little more creative with cost-saving dating ideas.