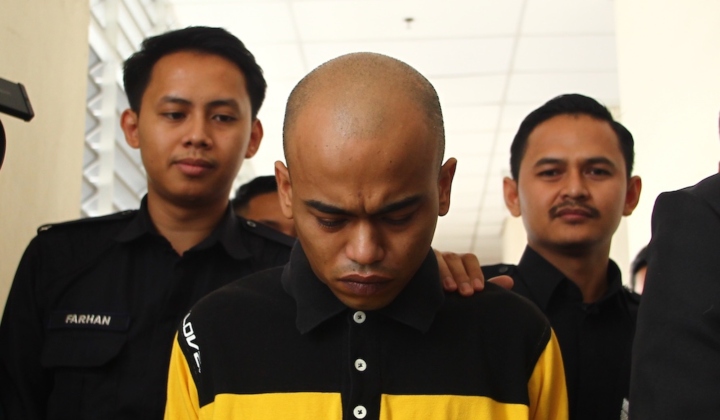 It seems like road rage is becoming more common in Malaysia, with the most recent viral case being that of Abang Botak, a motorcyclist who broke someoneâ€™s windscreen with his helmet after being honked at.

Talk about someone having a serious need for some hanger (hungry anger) management skills.

Abang Botak was picked up by cops and charged for his crimes within 24 hours of being arrested. After being charged, many netizens applauded PDRM for their swift action.

However, there were a couple of people who felt that Abang Botakâ€™s punishment of 12 months jail time was pretty severe, considering he didnâ€™t hurt anyone, and just broke someoneâ€™s windscreen aje.

If you compare Abang Botakâ€™s case with a couple of previous viral road rage cases, it might appear that Abang Botak has had the most severe punishment so far.

For example, in another recent case of road rage, local comedian Lan Pet Pet punched a security guard and was only fined RM2,000

And then there was the case of a dude who punched a Rapid Penang driver. He was only fined RM1,000

Notice how in these two cases, they all got off with just a fine? Well, the reason for this is a little thing called the Malaysian Penal Code.

According to Facebook user Khairul Azri, the actions of Lan Pet Pet and the Rapid Penang driver puncher fall under Section 323 of the Malaysian Penal Code, which basically says that if you’re found guilty of punching someone, you can face up to one year jail time or a fine of up to RM2,000 or both.

For first time offenders, the judge usually goes for the lightest sentence, i.e the fine.

HOWEVER, because Abang Botak damaged someoneâ€™s property, his actions fall into Section 427 of the Malaysian Penal Code.

It says that if someone causes damage worth RM25 ringgit and above, they can be punished with between 1 to 5 years jail time or a fine or both.

So, you know what you should do if you ever get angry on the road? Remain calm, record the incident and send it to JPJ lah!