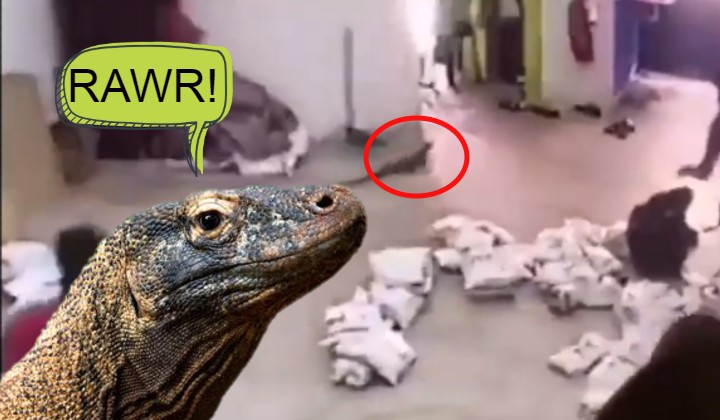 Just a few days after footage of a gigantic rat â€˜terrorizingâ€™ worshipers at a mosque in Indonesia made headlines, here comes another â€œanimal gone wildâ€ video that is currently making rounds on social media.

This time however, the funny hits much closer to home.

Originally posted by a user on Twitter, the video shows a recording of CCTV footage documenting the scene of panic that follows after a biawak – common Asian monitor lizard – made its way into a local courier delivery service companyâ€™s distribution warehouse, supposedly in Pontian, Johor.

According to the user, the tiny monster had apparently made its way into the ground floor of the shop lot, where workers were busy preparing for their deliveries of the day.

The video show the unsuspecting men, busying away at
their tasks before being flabbergasted by the sudden appearance of the reptile
within the facility.

The footage displayed the men hysterically moving out of the animalâ€™s path as it tries it makes its way deeper into the warehouse, before trying (emphasis on try) to get rid of the cold blooded creature who had taken refuge behind some boxes.

Obviously seeing the humor in it too, the roughly 1 minute video was accompanied by well know funny soundtracks associated with today’s top memes.

According to the post, the apparent culprit of the incident had been a man (seen below) who by the looks of it, had been chasing the animal through an alley behind the warehouse before the animal had darted into the building for cover.

No human or biawak were harmed in the incident.

Catch the comical episode unfold below: