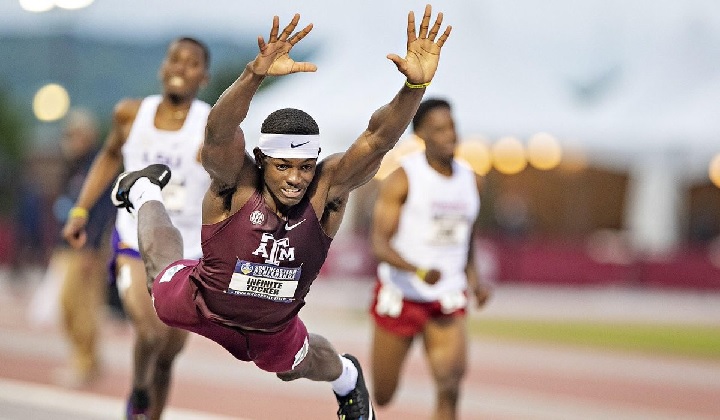 Normally, athletes bow towards the finishing lines in hopes of crossing it a little bit faster, but Infinite Tucker took it a leap further.

At the recent Southeastern Conference (SEC) Track & Field Championship, he finally won gold when he took a Superman-style leap at the crossing line.

When Miller-Uibo â€œdoveâ€ (fell) to beat Felix a couple years back, I was on the radio for an hour or so explaining to people why diving is likely not a good finishing tactic. Thankfully Infinite Tucker wasnâ€™t listening. #bestnameever pic.twitter.com/JR0VhZyBq3

Hence the reason he leaped with joy.

He wanted to hug his mom.

At the last SEC Championship, he only won Silver.

This time, he beat his team mate, Robert Grant by a mere 0.09 seconds lead.

Social media has gone mad with his skills and determination for gold.

I wish I was as dedicated to anything as Infinite Tucker is to crossing the finish line first. pic.twitter.com/DgEoPvJwHZ

How badly do you want it? #MondayMotivation pic.twitter.com/cdBdFO5zzV