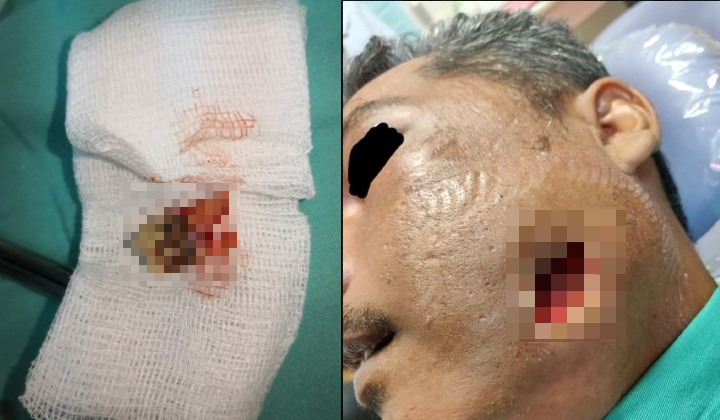 NOTE: We’ll post the uncensored picture at the bottom of this article because it’s really gross and we don’t want to shock you.

A Kelantanese man with a recurring toothache tried a household remedy to stop the pain.

The outcome caught the attention of Netizens with over 7,700 retweets and 13,000 Facebook shares in total.

At first his ‘remedy’ worked but a few weeks later, the pain returned, and again he tried his remedy.

This time, it didn’t work.

Do you know what his remedy was?

He used brake oil for his toothache.

His ordeal was initially shared by a dentist from Hospital Raja Zainab II, reported to be a Dr Wee Sin Hua, who said he had obtained the patient’s permission to share the pictures and story on the web.

After failing to resolve his pain, the man then had sought treatment at a medical doctor who had given him a course of antibiotics.

Unfortunately that also did not work.

By the time he was referred to the hospital, the swelling was so bad that his head was described to have been doubled in size..

The swelling was caused by a pus collection that initially started in his gums, but by the time he was in the hospital, it had spread to his brain!

Worst still, the pus collection was so severe they immediately sent him to the Operating Theatre and the Intensive Care Unit (ICU).

He spent a week in the ICU before he was allowed home.

Later, another fellow dentist on Twitter also commented on this case.

He said that if this case was attended to earlier, it would have been a simple procedure that wouldn’t need an Operating Theatre or ICU.

Should have just had the tooth removed, right?

A word of advice from Dr Happy Wee, please attend your routine 6-month dental checkup and only visit qualified dentists if you have any dental issues.

Besides, prevention is better than cure!

NOTE: Okay. You must really want to see this. Ready?

Well, you read all the way to the end, so this one’s on you.

Actually, What Are The Agong’s Powers?

The Day After We Found Out There Was No Majority (Live)

Walk-ins no longer accepted at UMMC psychiatry clinic. Here’s how you can still get help