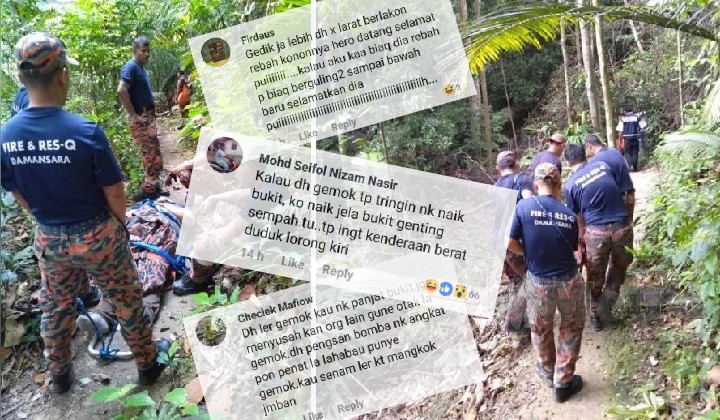 A man has risen to defend a fellow hiker who was subjected to online abuse after she was rescued by the Fire and Rescue Department.

In the Hiking And Recreation Around Malaysia (HARAM) Facebook group, Zairi Zainal claims to represent the page admins in condemning the trolls.

He points out that the woman had suffered cramps in both legs after reaching the end of the trail so Fire and Rescue had to be called in.

It’s the job of Fire and Rescue to rescue which is why they are called the FIRE AND RESCUE DEPARTMENT. But they are trained. They have basic medical training. They’ll check her condition before taking any action. So if you think she’s bluffing, there would be no reason for them to carry her. You think firemen are stupid? They didn’t make any noise or complain about having to save a life, but you’re making noise. Why?

He also points out that a person’s weight or height doesn’t matter in an emergency as sometimes things just happen.

For those who told her not to go hiking because of her shape, he says she was an experienced hiker and hiking was good exercise.

As for those who said she was simply a trouble to others, Zairi says one day, you might need help from the person you’re condemning.

“If you don’t want to respect each other as human beings, those critics and fat-shamers can buy a big box, climb in together and float yourselves out to sea. The further out the better.”

The initial incident was reported two days ago by a local news outlet which highlighted the weight of the woman.

In the report, the Fire and Rescue personnel had to take turns carrying the woman out of the Kota Damansara Community Forest Reserve.

This Epic Forest Skywalk With A Stunning View Of KL Opens On Merdeka Day!